“I was waitlisted. When I was told room had opened, I was given a handful of leftovers to choose from. I was drawn to ‘of topological shift,’ (comma intact) without having read the poem and with only a vague knowledge of the meaning of topology. I chose it that very minute anyway. I then embarked to research what exactly topology is, as people would undoubtedly be asking me its meaning.

I came to Boulder to attend the Jack Kerouac School of Disembodied Poetics, of which Anne Waldman is a founder. I came with the intention of transformation. I came to allow the topology of the world around me to shift. I came in pursuit of good health; the topology of my body has shifted. The tattoo shifts the topology of my skin.

My relationship to this phrase is complicated. I am a Cancer and my phrase is from the corresponding stanza. I am a poet and I will continue to dissect the meaning of this phrase, and of Anne Waldman’s entire poem, for as long as it is on my skin.

Surrendering one’s body permanently to art has some risk. But in submitting, I wanted to submit fully. This is why I decided to keep all of the stars, to honor the intention of the original artists. I chose to keep the comma in honor of the larger work. The comma is a breath, an afterthought, and a meditation on the phrase’s meaning for those who will read it.

I chose its specific location because of how seamlessly the design moves with the curvature of the shoulder blade.

The tattoo is a prayer for body: to continue to shift, as bodies do, and to grow and strengthen in pursuit of life-long health. It is an homage to the bodies that created the art, to a collective, and to a small, beautiful city that has permanently influenced my life.” 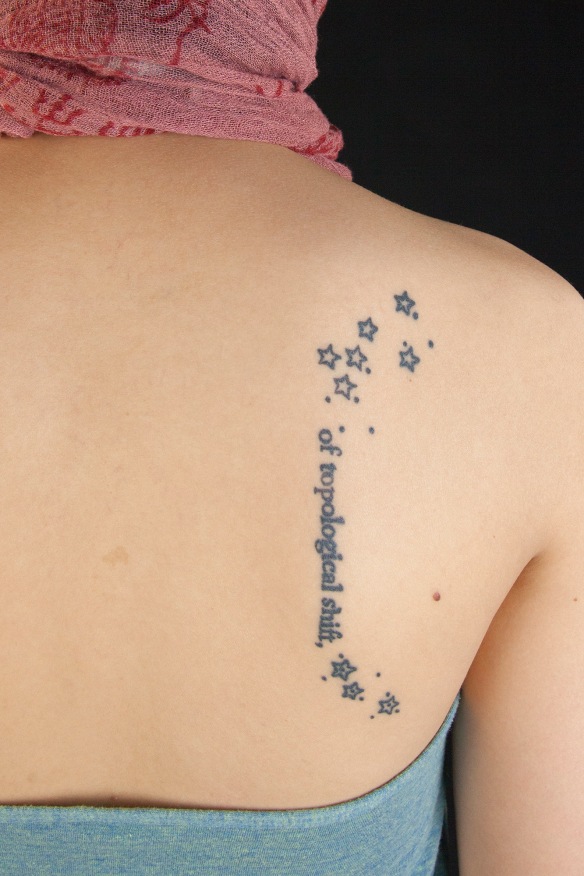