“My word choice is ‘dramatic,’ which is what I liked best out of the remaining words. I found out about the project after the initial deadline for signing up, so most of the phrases had already been taken. Ideally, I would have picked a phrase including the word ‘Aquarius’ since it’s my zodiac sign, but that was not available. The word ‘dramatic’ was from the Aquarius stanza, which is why I went with it. When I told friends which word I picked, the typical reaction was ‘You’re so not dramatic!’ I know I’m not a dramatic person, nor do I typically have drama with people, but I have dramatic interests that include roller derby, pole dancing, and fire breathing and eating.

Getting the actual tattoo done was a bit dramatic! I chose to have it on my left side at my waist—it was the most painful spot I’ve ever had tattooed. I’m very happy with it though! It just seemed to be the right spot for the tattoo design, and I think it looks beautiful.

I decided to be involved with the project because I love Boulder! I moved here from Connecticut five years ago and fell in love with it immediately. I also loved the idea of being part of a living art project.” 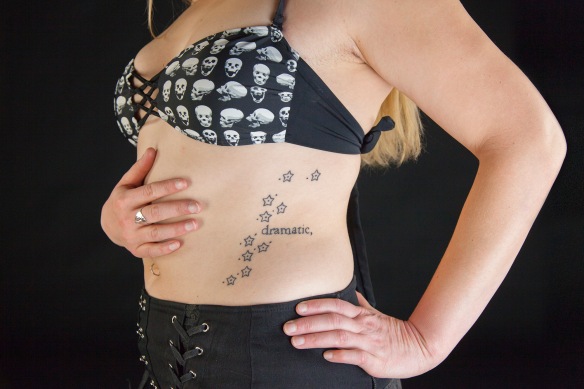